The UK government’s explanation of why it has decided to stop comparing the UK’s Coronavirus infection and death rates with China’s is deeply ironic. They say that Chinese stats can’t be trusted.*

There is a more obvious explanation; that China has been very successful in keeping its death rates down while the UK has not, that this is deeply embarrassing, and becoming more so as time goes on.

This is what that looks like in deaths per million as of April 26 (1). 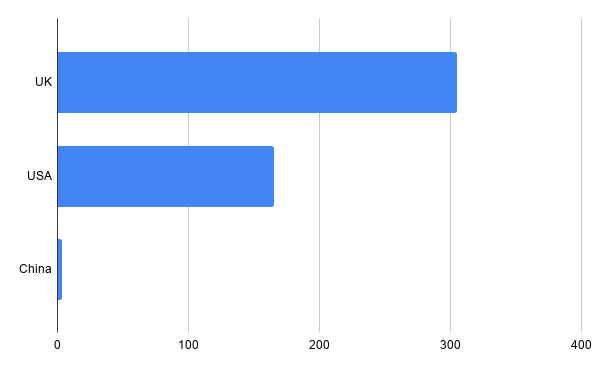 This is significantly worse than the previous week. The Chinese figure is unchanged (on 3.3 per million) – because the virus is under control – while the US and UK figures deteriorate (from 101 to 168 per million for the US and from 206 to 305 per million for the UK) (1). This figure means that the Chinese can now start to safely reopen their economy. It is quite clear that the UK and US cannot do so safely at this level. Denial is essential to even contemplate doing so. ** Whitewashing out the discrepancy with China, is a further aspect of playing down or ignoring their experience and any lessons that could be learned from it – could be preparing the ground to do so at an unsafe level.

The trustworthiness of UK official figures is also questionable. While the daily death rate is confined to those who have died in hospital after being tested and serves a purpose in tracking trajectory, it does not include anyone who has died anywhere else; and no one in government is keen to point out that the headline figure is not the total of people who have actually died: which is considerably larger. This may be considered a sin of omission, but it nevertheless serves a purpose in downplaying how bad things actually are; another form of denial.

A Financial Times analysis (2) incorporating the Office for National Statistics figures on all deaths concluded that the official UK figure of 17 337 deaths up to Tuesday 21 April is less than half the actual figure. That looks like this.

*This is odd, because the WHO does trust them (as does the Financial Times; whose job it is to provide accurate information for the business class). A logical next step in this trajectory will be to downgrade relations with the WHO – which also serves a purpose in that it stubbornly insists on tighter conditions for easing lockdown’s than the UK government is prepared to contemplate. See previous blog.

**It is clear that the ground is being prepared to do this. Train operating companies are preparing to open up 80% of services by May 18th. Statements by Nicola Sturgeon and Mark Drakeford on behalf of the Scottish and Welsh governments on Friday on easing the lockdown to “live with” or “live alongside” the virus indicate that a reopening is being planned that is a response to commercial, not health, pressures. When Keir Starmer says that the UK risks being “left behind” in its consideration of “exit strategy” in the context of other countries beginning to ease restrictions, this applies pressure in precisely the wrong direction. The UK has the second highest daily death rate in the world right now. As of April 25, that looks like this. 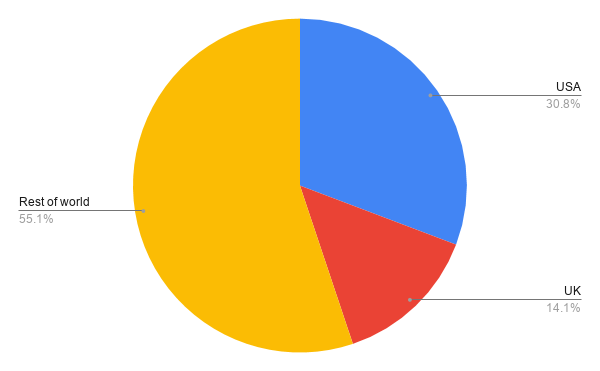 The points he – and the rest of the Labour and trade union movement should to be making are:

1. That the only safe exit is one in which the WHO ‘s 6 conditions are met in full and

2. That the current lockdown should be tightened to include ALL non essential work; as the quickest route to an exit is through cutting off all possible routes to infection.

3. We can no more “live with” the virus than we can live with climate breakdown.

The emergency measures being taken to deal with the immediate acute coronavirus crisis- and the preparedness to take them – can be seen as a model for the emergency measures we need to take to save ourselves from climate breakdown. Making extraordinary efforts to return to the “normal” functioning of an economy and society that is destroying the conditions for its own existence is like treating a patient to recover from an acute illness just to put them on palliative care only for a chronic underlying condition that has no need to be fatal.
The Coronavirus is an acute challenge that could – if let rip – kill millions globally. All other issues are redefined by it. The crisis will go on for months and there will be no return to “normal” afterwards. So many things previously considered impossible have become inevitable in the last three weeks and some “impossible demands” will look absurdly moderate quite soon.

This was from March 31st, so the Chinese bubbles will still be the same size. The US bubbles will now be significantly larger, and be even larger than that next week, and the week after. On March 31st 1550 had died in New York. By April 7th it had risen to 5489; so the New York bubble here should be just under four times as big.

The deeper existential crisis is that of climate change – or more broadly the human impact on the environment. This is linked with coronavirus because viruses have jumped the species barrier both from

The wholesale overuse of antibiotics in this sort of “farming” is also a clear and present cause of the rise in anti-biotic resistance that is also a significant and growing health risk for all of us.

Labour’s job is to keep banging away at this and in no way to become complicit in the idea that dealing with climate change can wait until we have regenerated the economy as it was enough to have enough left over to make a transition with what we can “afford” over and above normal functioning. We have to recover by and through the transition if we want a future.